Choose your country or region:

V-Cone vs. Coriolis: A Comparison

When engineers seek out a meter for high accuracy measurement, two potential options emerge that differ in technology: the Coriolis and the V-Cone®. So how do these meters compare in application and specs?

The V-Cone operates on the Bernoulli principle of differential pressure, measuring flow in the center of the pipe with a minimally-intrusive cone. Ideal for applications in both upstream and downstream oil and gas, industrial, and even municipal water industries, the V-Cone is prized for its durability and 25+ year lifespan.

The Coriolis is a direct mass measurement flow meter and a popular choice for downstream oil and gas applications such as refineries and LNG vessels. The technology of the Coriolis is especially desirable in custody transfer situations. In fiscal applications such as hydrocarbons sold between companies, the direct mass measurement of the Coriolis comes in handy when the density of the hydrocarbons fluctuates due to temperature.

Although more niche in the oil and gas industry than a V-Cone, the two meters do overlap in application when it comes to high pressure gasses, as well as oil and gas and water separators. The Coriolis is a popular choice for downstream measurement of asphalt, bitumen, fuel, and diesel oil because of its precision volumetric accuracy.

When utmost accuracy is key, the Coriolis can’t be beaten at ±0.1 – 0.15% accuracy, wholly due to its direct mass measurement. While popular in oil and gas, the Coriolis is also common in food and beverage and pharmaceuticals. When water bottles or medicine bottles need to have precise fills, the Coriolis meets expectations.

The V-Cone is often sought after for its space and weight-saving abilities in retrofit applications, as this meter’s minimal-to-no straight-run requirements eliminates the need to repipe areas with limited real estate, or add piping to applications like offshore oil platforms that are bound by weight limitations. The Coriolis’ accuracy isn’t affected by velocity profile distortion or disruptions in the pipe, allowing shorter straight-run requirements.

Mechanical Meter vs. No Moving Parts

Despite the similarity in accuracy, these meters have more differences than commonalities. The V-Cone is a highly customizable flow meter, in end fittings, exotic materials, and nominal pipe size. As the Coriolis is a “moving parts” meter, it’s more limited in material construction. Additionally, the Coriolis may run into issues if the application involves downward flow in vertical piping, as cavitation can affect the meter’s accuracy.

The mechanical aspect of the Coriolis is what can affect its ability to be incorporated into a project. The accuracy of the Coriolis is heavily impacted by surrounding vibrational resonance, so an application with close-proximity machinery frequencies will cause issues for the meter. Also, if a master meter and reference meter are required for the flow project, a Coriolis won’t be the best option, as dual vibration can affect each meter.

The V-Cone, on the other hand, isn’t a “one size fits all” meter, offering variations of cone support in the form of pin gussets, pipe gussets, and more, that add rigidity to the construction of the meter and mitigates vibrational hazards commonly found in oil and gas and industrial applications. 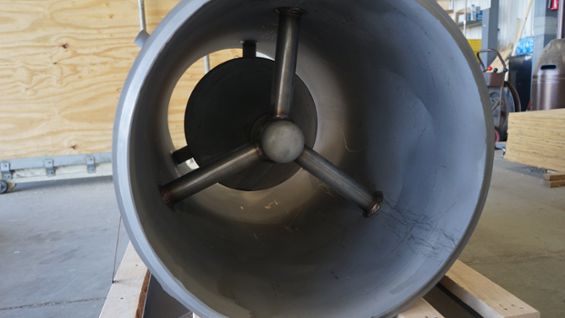 A large line size V-Cone with the 3-gusset design.

Because the Coriolis has moving parts, tubes flexing and moving against one another to create the electrical signal, the Coriolis will need resetting or recalibration on an annual basis. The mechanical assembly is prone to corrosion, and if a part even as small as a spring needs to be repaired, the entire meter must be replaced.  Similarly to an orifice plate, the Coriolis needs to be fine-tuned for the flow range, as it only has an average turndown ratio of 5:1. It can handle multi-phase flow and the meter itself can manage multivariable measurement, including density, flow rate, temperature, and more, making it a more versatile meter than the V-Cone.

The V-Cone is an investment meter, as its 25+ year lifespan and virtually no required maintenance makes it an “install and forget it” meter. Its 10:1 turndown ratio makes it a great choice for applications experiencing a wide range of flow rates, and the total head loss of the V-Cone is relatively low for a differential pressure meter. While it cannot measure multiphase flow, the V-Cone can accommodate various transmitters that allow it to be a multivariable flow meter, as McCrometer’s ExactSteam™ product allows the V-Cone to measure flow, static pressure, temperature, and more.

The V-Cone can be manufactured in sizes from 0.5” to 120” and while the Coriolis has a range of pipe sizes, they’re commonly found in sizes smaller than 10”. McCrometer’s Wafer Cone®, offered as small as 1”, is a more comparable meter to the small line size Coriolis.

A lesser-known benefit of the V-Cone is its ease of use; if there are any questions or issues installing or operating a V-Cone, troubleshooting can be done via the telephone without the McCrometer team necessarily having to inspect the meter directly. A Coriolis has more individual parts that make up the meter and is more operationally complicated. If there are issues, the customer will have to have a service operator from the manufacturer come to inspect it or pull it out of the line and have it shipped to the manufacturer. The simplicity of the V-Cone’s design means simplicity of operation and simply less hassle.

Whether or not a V-Cone or a Coriolis works for your specific application is wholly dependent on the flow project environment and the specs. Both meters shine under various conditions and are prized by engineers and operators for their performance in a variety of tough situations.

To learn more about the V-Cone’s various benefits and how it can work for your unique flow project, we recommend taking a look at the product page for technical documentation or contacting the factory directly for a quote.